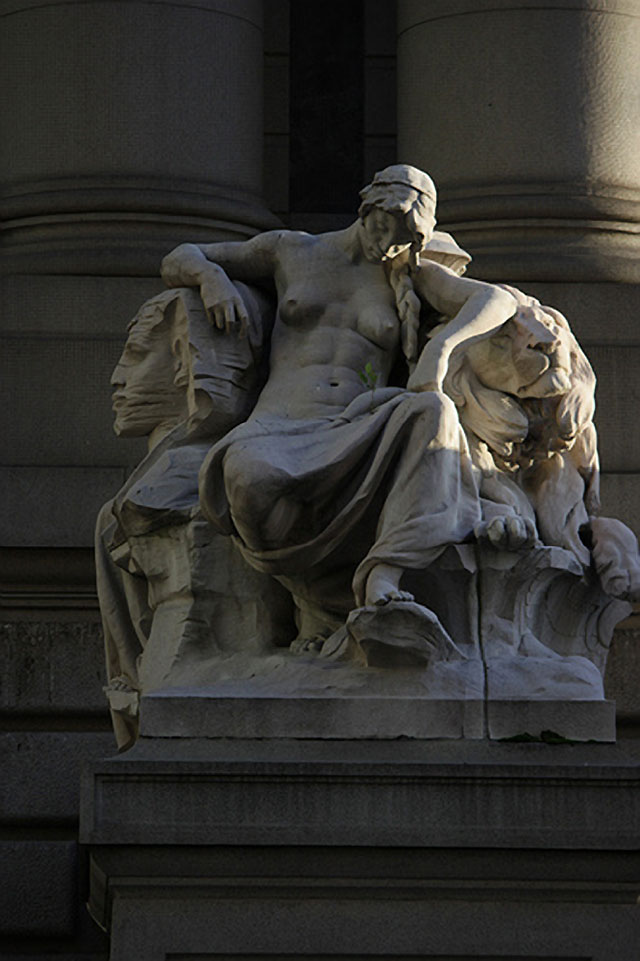 Aromatic tobacco, red wine and music were my sole sources of light throughout those days of my black hole of an existence. I would stay in my living room chain smoking, drinking, listening to Beethoven, Chopin, Sun Ra, Miles, Coltrane, Felá, intermittently pacing the floor like a caged lion.

It was the period in my life when I had become disillusioned with academia. I had uncovered its inability to impart knowledge, its destiny being, I had finally comprehended, social engineering. I, therefore, had decided to abandon it as my guide at knowledge seeking.

My spirit enchanted by the magic of Spring, one particularly lovely spring day during that period I decided to go walking about New York City, people watching. I felt good, having recently overcome my bluesy existence, and resolved to thenceforth play the lone detective in my search for Knowledge. My intention was to aimlessly walk about the city, starting at its southernmost end, the Staten Island Ferry Terminal, and walk northward as far as I could endure. It was on that day I encountered the statues, those magical statues, in front of the “Old Custom House.”

The “Old Custom House” is situated at the foot of Broadway, the southernmost district of the city. Adorning the front of the building are the statues, four of them, massive. They would come to dominate my thought for years, a measure of their irresistible charm on me.

A huge building this “Old Custom House” is. A long wide staircase leads to its main entrance. Atop the staircase is an archway; on a big banner hung underneath the bowed entrance of the archway is written: “The National Smithsonian Museum of the American Indian.”

As you stand on the street-level facing the building, you see the statues lining its frontal length: two in its middle, flanking the staircase, one at its right outer corner, one at its left outer corner.

The statue at the right outer corner of the building portrays a voluptuous, sultry woman in slumber, her perky breasts exposed to the world. Her head drops to her side, her left hand rests on the head of a lion sprawled belly-down at her feet; its eyes closed in sleep, her right hand rests on the head of the Sphinx. And behind her is a draped figure whose face is somewhat hidden.

The next statue portrays a stern-faced woman, a crown on her head, a breastplate engraved with esoteric symbols covering her torso. Her left hand, the fingers clenched into a fist, rests on a book atop a globe depicting the world, behind which sits a cloaked figure reading a book. Behind her is the prow of a ship, from which protrudes what looks like a warhead. Beside the ship is a lion and, barely visible, the head of a jackal (or is it the head of a bull) and a grotesque eagle-headed figure, its beak curved. Visible behind her is an eagle, its wings somewhat unfolded.

The next statue portrays a woman looking boldly ahead of her. She holds a torch in her right hand and a cloak in her left hand over the head of a kneeling figure, behind the figure is another seated figure reading, it seems. On her lap rests a bountiful sheaf, and behind her are an eagle and the figure of an American Indian gazing into the distance.

The next and last statue portrays a woman on a throne, a crown on her head. She sits with her eyes closed, holding a long stemmed rose between her right thumb and middlefinger, both of which she touches together in a manner suggesting she is meditating. A serpent is wound round the stem of the rose. On her lap sits a miniature statue of Buddha. Underneath her feet are human skulls. On her left hand side are men bowing to her as if acknowledging her majesty, surrendering to her will. On her right hand side sits an upright tiger. Behind her, right at the back of her head, blocked from a frontal view of her, is a cross. The eerie aura of all the statues is stronger in this statue in particular, which is somewhat terrifying to look at for long, especially when you gaze at the woman’s face, her eyes closed in meditation. Of all the statues, I was that day and today remain most drawn to this one.

What I had planned as a daylong walkabout the city ended with the statues. I had left them and gone to a nearby coffee shop and mused on them. And since then they had prowled in my thought, prompting my visiting the building many more times to gaze at them from the comfort of a bench chair at the Bowling Green Park situated across the building.

Utterly intriguing the statues are; magnetic their charm on my thought, my emotion. I would sometimes visit them at night, their eeriness more intense at this time of day. I knew intuitively they tell a hidden story. So intense was my desire to decipher their story that, eventually, I decided to do the inevitable.

My endeavor to uncover the hidden story the statues tell led me to literature on them; some of which were sent to me or handed to me by friends and acquaintances sympathetic to my “noble” mission. It was thus I began to accumulate information about the statues.

What I “learned” about the statues in the literature I read on them I immediately suspected were merely informational: The Custom House was the center of commerce for the United States. In the early twentieth century most of the income of the entire government of the United States came from custom duties. The location of the Custom House close to New York Harbor is symbolic of and reinforces its importance to America’s economic wellbeing. Cass Gilbert was the architect of the building. Daniel Chester French, chosen by Gilbert to “adorn” the (“his”) building, was the sculptor of the statues. . . .

I have many times heard tour guides regurgitate that information about the statues to clusters of tourists in front of the building. Sometimes during the tour guides’ fervent regurgitation, they offer pointers, somewhat, to the tourists about the hidden story the statues tell. As when a particularly excited (or perhaps dedicated) tour guide would tell the tourists the statues “indeed” portray the four continents of Asia, Africa, Europe and America. That the statues portray the four continents I had found out in the literature I read on them. And it was on this particular information I had increasingly concentrated my musing on the statues, incessantly thinking about voluptuous, sultry Africa deep in slumber, as is the lion sprawled at her feet, the Sphinx magnificent beside her; about stern faced Europe, an ageing queen, looking as if she had been wronged and was bent on revenge; about exuberant America, looking boldly ahead of her, eager to confront the world, and about majestic, sacred Asia, on whose lap sits Buddha, the cross erect at the back of her head, men bowing in deference to her, human skulls beneath her feet.

Yes, the statues portray the four continents, but what about them? (I believe deceptive all the information extant on this question.) What is the real meaning of the statues, what are they really concealing or revealing? This question nagged me.

Playing the lone detective at knowledge seeking, I have come to realize, is wretched business, devastating, destabilizing and a sure path to “lunacy.” Knowledge only belongs to the gods. (The Dead know it, but they are dead, and, therefore, not readily accessible to the living, the human being in search of Knowledge.) Only the initiated human being provided the clues with which to decipher esoteric symbols, the divine mode of communication of the gods, can attain Knowledge. Still, I keep thinking about the statues. (Perhaps the Dead would in time be impressed by and reward my devotion to and tenacity at knowledge seeking.)

After innumerable sunrises, sunsets and moons of musing on and visiting the statues I now know they captured my imagination because they tell an earth shattering story. I continue to have an intense hunch it is a coded, cosmic story; the age-old conundrum of a story which explains much about, perhaps the entirety of, the march of History amid us.